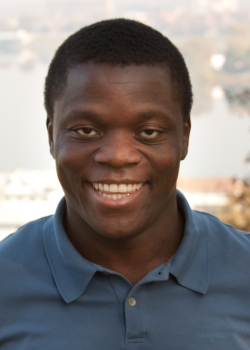 In 2013, Hank accepted an invitation by the Harrisburg Brethren in Christ Church to begin serving as Senior Pastor in November 2018. Hank actually began serving at the Harrisburg Brethren in Christ Church as a Youth Pastor in September 2008 before becoming Pastor of Discipleship & Youth Ministries in October 2013. The expansion of his responsibilities over the years has included work with HBIC’s Church Board and Mosaics Committee as well as our Adult Discipleship and Worship Ministry Teams. In transitioning to the role of Senior Pastor, additional staff were hired in 2018 to provide leadership for Youth and Worship Ministries.

Hank was born in Monrovia (Liberia). Due to Civil War, Hank’s family lived as immigrants and refugees in Freetown (Sierra Leone) and Abidjan (Ivory Coast), before settling in Palisades Park (New Jersey) and Philadelphia (Pennsylvania). Hank graduated from Central High School in Philadelphia, and then from Messiah College in 2004. He completed a Master of Divinity from Evangelical Theological Seminary in May 2014, graduating with high distinction.

Hank’s ministry experience has been gleaned through serving at camps, community and youth centers, and in the social work field. Hank and his wife, Shell, live in Harrisburg and welcomed their first daughter, Harper Marie, in January 2014. They welcomed their second daughter, Kennedy Marie, in April of 2016.

When asked about his passions, Hank shares that he enjoys encouraging people, challenging them to take ownership of their faith, and living out the gospel of Jesus Christ. He believes our plight is to live and love like Christ lived and loved. Hank also enjoys sports, fellowship with family and friends, traveling, and board games.