Sometime in my early young adult years, I heard a teaching on anger, I can no longer recall the setting or the teacher. But I well remember the point – at the root of anger one can find a disappointed expectation. I’ve thought a lot about this statement through the years, and I have seen it proven true in my life – at times when I’ve been angry, I’ve also been able to identify a root of disappointed expectations.

I’ve been thinking a lot about this statement in the last week, too, as anger bubbled up from deep within me at various times. Things that were slightly irritating and, under normal circumstances would be just that, a slight irritant, seemed to spark in me what felt like red hot anger. (Added to the difficulty of feeling such unusual rage out of nowhere, I was also very aware of the fact that the fruit of the Spirit we had just been talking and thinking about was patience and the fruit for this week was kindness – Ugh! I felt many things, but patience and kindness didn’t quite make the list.)

It wasn’t difficult for me to identify my disappointed expectation, it is common to many others right now, too… This past Sunday our son, Ryan, was to graduate from law school. We’re very proud of his hard work through these last several years and of his growing passion to work for justice for those who may be disadvantaged within our criminal justice system. So, not being able to see him graduate at the end of these three years (or even to see him, for that matter), as well as not knowing when the law school might be able to hold their graduation ceremony and celebration, really was a huge disappointment. And I realized that this disappointment was largely at the root of my anger problem.

If I had to describe my feelings in one sentence, I’d say that I’ve been angry at coronavirus for stealing from us (and every other graduate, whether high school, college, or grad school) what was meant to be a very special celebration.

I realize that our loss is disappointing, but it’s not life-altering like some people’s losses. Others have experienced far worse: the loss of life, of family, of health, of mental health, of safety, of jobs, of security. I am angry at coronavirus for stealing all of these things and more…

A number of years ago, I preached a sermon on Psalm 46. (The setting for this psalm is a time that God’s people were in trouble – the Assyrian Empire which had taken the Northern Kingdom, Israel, captive was also closing in on the Southern Kingdom, Judah. Even the shape of the Assyrian Empire on a map of that time period looked like it was about to pounce upon and devour its prey.) Psalm 46 reminds us that the Lord Almighty is an ever-present help in times of trouble.

I shared the following in that sermon:

“Much of the time, verse 10 of Psalm 46, Be still and know that I am God, is used by people to refer to being quiet and spending time in God’s Word, which is a very, very good thing to do. But in the context of Psalm 46, the meaning is much bigger than that one specific way of being still. The verb used here for be still means to abate, cease, slack, weaken. The sense is to stop wrestling and striving, to relax.

Years ago, my family was on vacation on the Outer Banks in North Carolina. Compared to the beaches in Maine, where I grew up swimming, the water in NC is warm and inviting. We spent lots of time jumping the waves, boogie-boarding, and body surfing. I have never been a good or strong swimmer – I would describe myself as a fearful swimmer at best. One particular day I was riding the waves in toward the shore, and I got completely tossed about by the wave. Instead of just gliding toward the shore, I was under the water, which was very murky from the roughness of the tide, and I had been so swept up by the wave that I had no idea where the surface of the water was. I wasn’t in water over my head, but I couldn’t get up above the water because I couldn’t figure out where up was. In those brief moments, utter panic took over. Could I really drown in water that wasn’t any higher than my waist or maybe even my knees? I realized quickly that I wasn’t going to find which way was up by striving and rolling about in the water, and I was wasting precious breath with that striving. I realized I was only going to find the surface of the water and the air I needed by being still so that I could float to the top. So instead of flailing around trying to find the surface, I stretched out my arms and relaxed so I could float, and it worked!”

The waves of this life, trouble, invariably crash into us and knock us down. Our call is to be still, to know that the sovereign Lord is still in charge, no matter what may come against us. During this pandemic time, maybe, like me, you’ve felt knocked down by a wave of emotions. We have had and will continue to have many disappointments, from not being able to meet and worship together, to missing important celebrations, to much more substantial losses. As the waves come, let’s stretch out our arms and practice being still so we can find our way out of the waves. “The Lord Almighty is with us;” my brothers and sisters, “the God of Jacob is our fortress!” 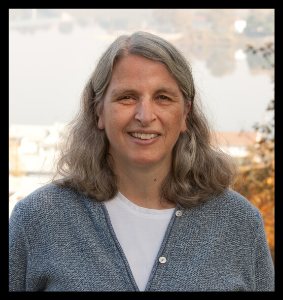 Be Still, May 2020, Pastoral Reflections